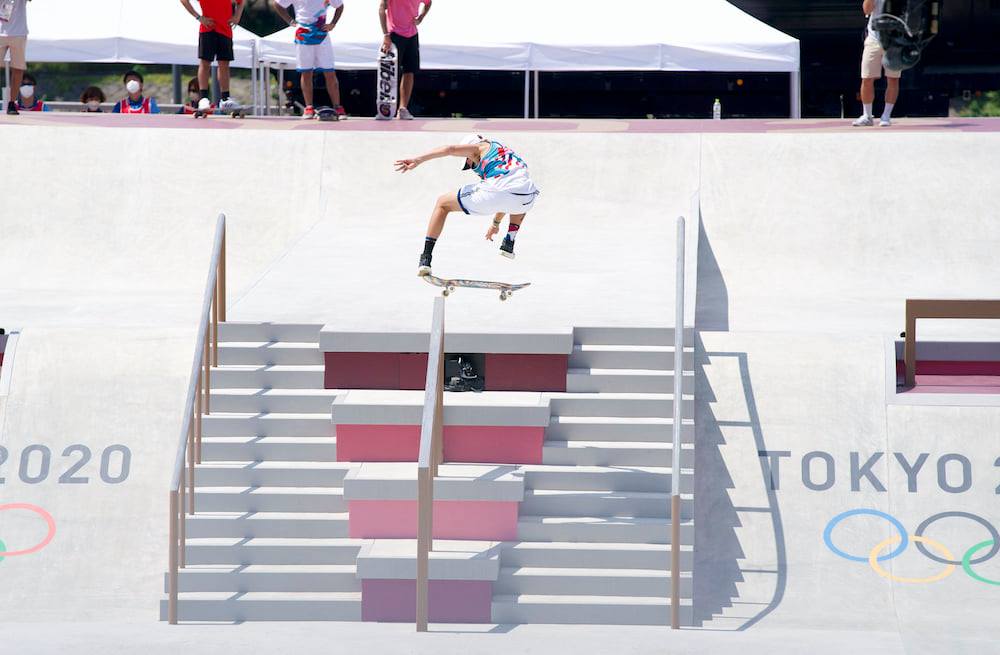 The International Olympic Committee added five “youth” sports to attract a larger youth audience for the 2020 Olympic Games in Tokyo. Of those five, one was Stateboarding. While the Japanese dominated the top medals, it was 20 year-old bronze medalist in the Men’s Street event, American Jagger Eaton, who seized the limelight with AirPods blaring rap and country music in his ears while he jumped and slid through the course.

Jagger (yes, named for Rolling Stones lead singer Mick Jagger) was once the youngest competitor at the X Games when he was 11 years old, placing 12th, and became one the the brightest stars in the skateboarding world. HIs athletic gifts, however, can be traced back a couple of generations. His grandfather, Stormy Eaton, was a Trampoline champion.

Before his successes in trampoline gymnastics, Stormy was an NCAA (National Collegiate Athletic Association) artistic gymnastics champion. As a matter of fact, there was nothing Stormy couldn’t do. He ran marathons, competed in Ironman events, took up skydiving, parasailing, motorcycle racing and more. He was even a musician and entertainer. No one would deny that he was larger than life.

To many, Stormy was a hero. Not only was he the guy everyone strived to be, he was the guy that everyone leaned on. He had a magical way of guiding people to make good life choices, which made him a great gymnastics coach. He opened the Desert Devils Gymnastcs club in Mesa, Arizona which became the premier gym for Olympic hopefuls. After his tragic death in 1995 in a plane crash, his son Geoff Eaton took over the gym.

When Geoff’s child, Jagger, showed an interest in skateboarding, he turned the Desert Devils gym into Kids That Rip, featuring a safe atmosphere for kids to develop and hone their skateboarding skills. That’s when Jagger began to shine, leading the way for his prolific stateboarding career.

It seems that it was Jagger’s destiny to wear an Olympic medal around his neck. But it was a goal set in motion decades ago by his incredible grandfather, carried on my his father, fostering hard work and dedication … but perhaps the genes were helpful, too.

During 2018 T&T Worlds, US Olympic Committee Takes Action to Revoke the Status of the Struggling USAGymnastics