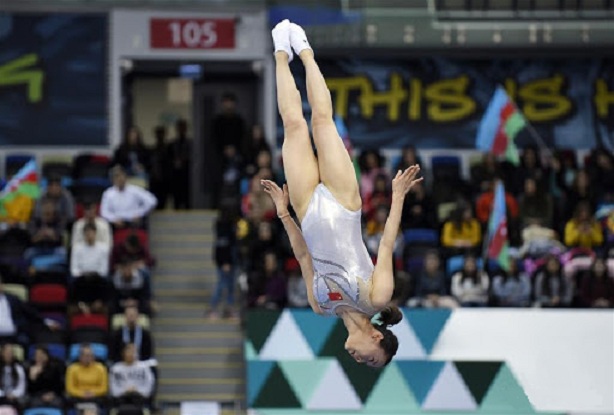 Zhu Xueying and Gao Lei won the men’s and women’s titles for of China at the trampoline World Cup competition in Azerbaijan.

Four-time individual world champion Gao gave fine performance at the National Gymnastics Arena in Baku to win the men’s competition with a score of 61.585.

To complete what could have been a picture from at the 2019 World Championships in Tokyo, Gao was joined on the podium by Ivan Litvinovich of Belarus in second and China’s Dong Dong 3rd.

Zhu’s dominant performance meant that her team-mate Liu Lingling finished with the silver medal after scoring 54.945.

Meanwhile, Russia celebrated a one-two in the women’s tumbling competition.

Viktoriia Danilenko was victorious after scoring 66.600 for her two tumble runs, with team-mate Irina Silicheva in second on 64.800.

Tia Taylor of United States completed the podium by scoring 64.300.

There was success for the US team in the men’s tumbling event, as Kaden Brown won gold by nearly two points.

The American gymnast won the competition with a score of 75.400, with Australia’s Ethan McGuinness second on 73.600.

Russia’s Aleksandr Lisitsyn ensured the final would be a repeat of yesterday’s top three in qualification, as he placed third on 72.700.