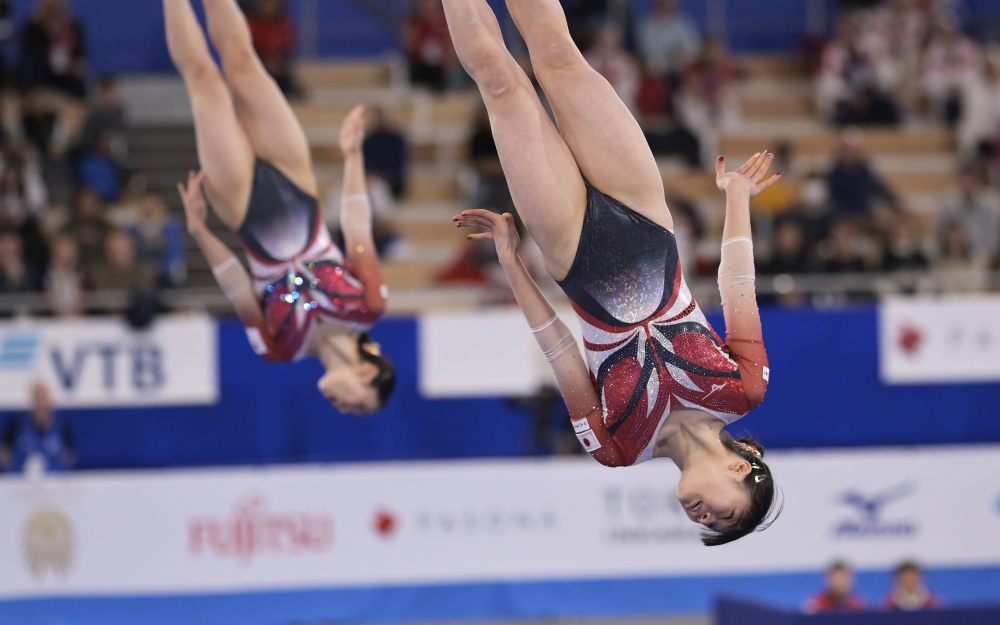 It wasn’t just the lights that dazzled the Japanese crowd at the Ariake Gymnastics Centre in Tokyo, their trampolinists did too by winning both the men’s and women’s synchronised trampoline events.

Leading after the qualifying round, Yumi Takagi and her partner Ayano Kishi showed that they were in perfect harmony to claim the gold medal in the women’s competition. Their countrymen Katsufumi Tasaki and Ginga Munetomo followed suit by winning the men’s event, and securing an unprecedented pair of World Championship titles for the host nation.

Kochesok and Kornetskaya were second with 48.570, while Samantha Smith and Rachel Tam of Canada did enough for bronze on 48.420.

“Two years ago we won two silvers and that gave us a lot of confidence,” said Kishi.

“And then we came out and just did it.”

In the men’s event, Tasaki and Munetomo’s gold medal winning performance scored 52.920. This was enough to dethrone two-time defending champions Uladzislau Hancharou and Aleh Rabtsau. The Belarussians finished with the silver medal, having scored 52.400. Russia’s Mikhail Melnik and Sergei Azarian were third on 52.060.

Mikhail Zalomin of Russia won his third consecutive men’s DMT world title to maintain his dominance of the event.

Despite being able to match the Russian in the qualification round, Ruben Padilla of the United States found himself one point behind Zalomin with a score of 76.1. Padilla’s compatriot Alexander Renkert received the bronze.

In the women’s tumbling event, the absence of Jia FangFang meant that there would be a new world champion, and up stepped Russia’s Viktoriia Danilenko to fill the void.

Danilenko ended her long wait for a World Championships, winning the title at the sixth attempt with a score of 69.90.