Skip to content
You are here
Home > Events > Trampoline World Championships 2019: Hancharou and Liu Lingling lead the way in first day of qualifications 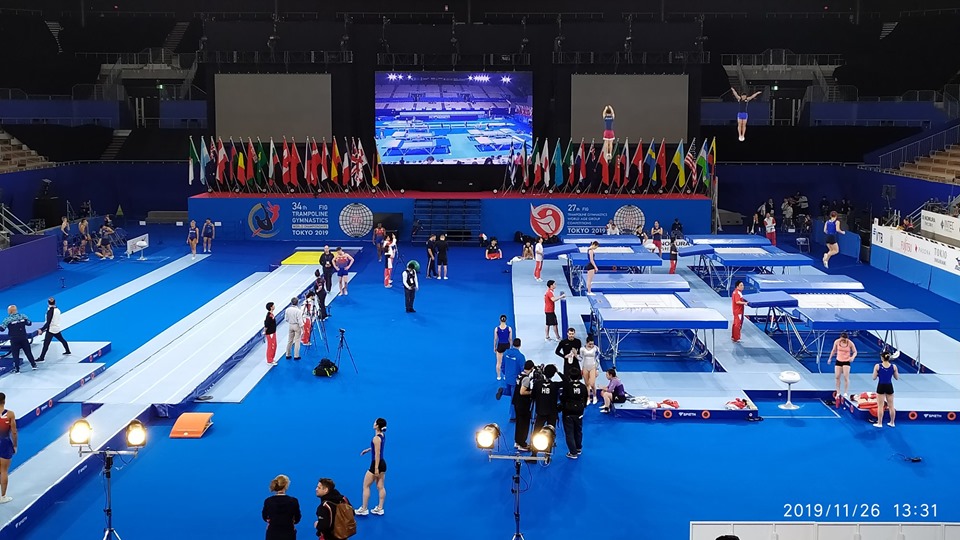 The 34th World Championships began at the Ariake Gymnastics Centre in Tokyo, Japan with the qualifications of individual trampoline, double mini-trampoline and women’s tumbling.

The Championships, which also serves as a Tokyo 2020 test event, will see up to 16 individual trampoline Olympic qualification spots secured and 20 in tumbling and DMT for Birmingham 2021.

And the action on the first day did not fail to live up to its billing.

The road to the individual glory is one that will be well travelled for the trampolinists: first up is the preliminary rounds with only the top 24 athletes (a maximum of 3 per country) progressing to the semi-finals, before they attempt to claim one of the 8 coveted places (a maximum of 2 per nation) in the finals.

In men’s trampoline competition, the reigning champion Uladzislau Hancharou of Belarus tops the leaderboard after two impressive routines with a score of 115.440.

He achieved two of the men’s events’ best scores in the first routine: he received the highest execution score (19.5), and the best horizontal displacement score (9.9), which was matched by Great Britain’s Andrew Stamp (20th), who is competing in his first senior world championships .

These helped him to finish the preliminaries almost 0.5 ahead of the defending champion, Gao Lei of China (114.995).

His countryman Dong Dong, who will not want to miss the opportunity to win a fourth world title, lies in 3rd place, ahead of Ivan Litvinovich of Belarus, who is followed by China’s Tu Xiao and Dmitrii Ushakov of Russia.

Yan Langyu of China is next in line in 7th, but because of the three per country rule will he will miss out of on the semi-finals. Aleh Rabtsau of Belarus, New Zealand’s Dylan Schmidt and Allan Morante of France round off the top 10.

Competing on home soil, Japan’s Ryosuke Sakai, Hiroto Unno and Yasuhiro Ueyama also made it through to the semi-finals, alongside Portugal’s Diogo Abreu and Mikhail Melnik of Russia.

The women’s event was the battle of the Asian powerhouses, with the top seven places being taken by either China or the host nation Japan.

Liu Lingling, the 2014 world champion, leads the way for China, with a score of 106.460, with Huang Yanfei in 2nd (105.375) and Li Dan 4th (104.670). Splitting the Chinese is Hikaru Mori of Japan in 3rd. Chisato Doihata follows her in 5th, Reina Satake 6th and Megu Uyama 7th. Unfortunately for Uyama, the three per federation rule means that she fails to progress to the next round. Great Britain’s Kat Driscoll suffered the same fate after finishing behind her team-mates Bryony Page (9th), Laura Gallagher (13th) and Isabelle Songhurst (15th).

Other ladies who made it through to the semi-final are Lea Labrousse of France (8th), defending champion Rosie Maclennan of Canada, Germany’s Leonie Adam and Maryna Kyiko of Ukraine.

With the five-time world champion Jia Fangfang of China sidelined through injury, the question was who would fill the breach. And the question was answered by 2018 silver medallist Shanice Davidson of Great Britain.

The 19-year-old, who led the way from the first group of the competition, comfortably qualified for final with a score of 68.300. She was followed by the woman she beat into 3rd place in 2018, Russia’s Viktoriia Danilenko. She qualified in second with a score of 67.5.

She is followed by Eve Doudican of the USA, France’s Marie Deloge, Russia’s Elena Krasnokutckaia and Fang Lulu of China.

The two per federation in the final rule means that Russia’s Elina Stepanova (8th) and Great Britain’s Aimee Antonius (9th) both miss out on the chance to contest for medals. That honour goes to Emilie Wambote of France (10th)

Pre-championships favourite Tachina Peeters of Belgium will also not get the chance to contest the medals after a loss of momentum in her first pass saw her drop down the rankings.

It appeared to be business as usual in the men’s competition, as four-time world champion Mikhail Zalomin leapt to the top of the leaderboard after the preliminaries. But the surprise for some is that he has been matched by the US teen sensation Ruben Padilla.

Padilla, who was second to Zalomin in St Petersburg in 2018, put on an extraordinary display with two passes that he had only competed once before in competition, at the Spanish World Cup stop in Valladolid. They scored 76.0, to place Padilla on the same score as his hero.

Andres Martinez of Spain finished the preliminaries in 4th places, thanks to two solid passes that saw him score 74.0. Just 0.1 behind is Canada’s Mario Bruno, with the USA’s Alex Renkert and Portugal’s Tiago Sampaio Romao another 0.1 adrift, both with a score of 73.80.

Andrei Gladenkov of Russia finished the qualification round in 8th, with a score of 73.70. But because he was behind two of his team-mates, he misses out on the final. Carlos Manjon Azcona of Spain steps in to fill the line-up.

In the women’s event, Lina Sjoeberg showed that she was not going to give up the title that she won for the first time in St Petersburg in 2018 without a fight.

The defending champion from Sweden scored 70.0 to become the top qualifier. Kim Beattie of Great Britain was hot on Sjoeberg’s heels in 2nd with a score of 69.8.

Half a mark separated the rest of the qualifiers for the final: Canada’s Jordyn Miller-Burko ended the preliminaries in 3rd, thanks to a score of 69.6, with the European champion, Kirsty Way of Great Britain, a further 0.1 behind.

Polina Troianova of Russia and Tristan van Natta are 5th and 6th respectively, having scored 69.4. Bronwyn Dibb of New Zealand (69.3) and Russia’s Aleksandra Bonartseva (69.1) claimed the last two spots in the final by qualifying in 7th and 8th respectively.