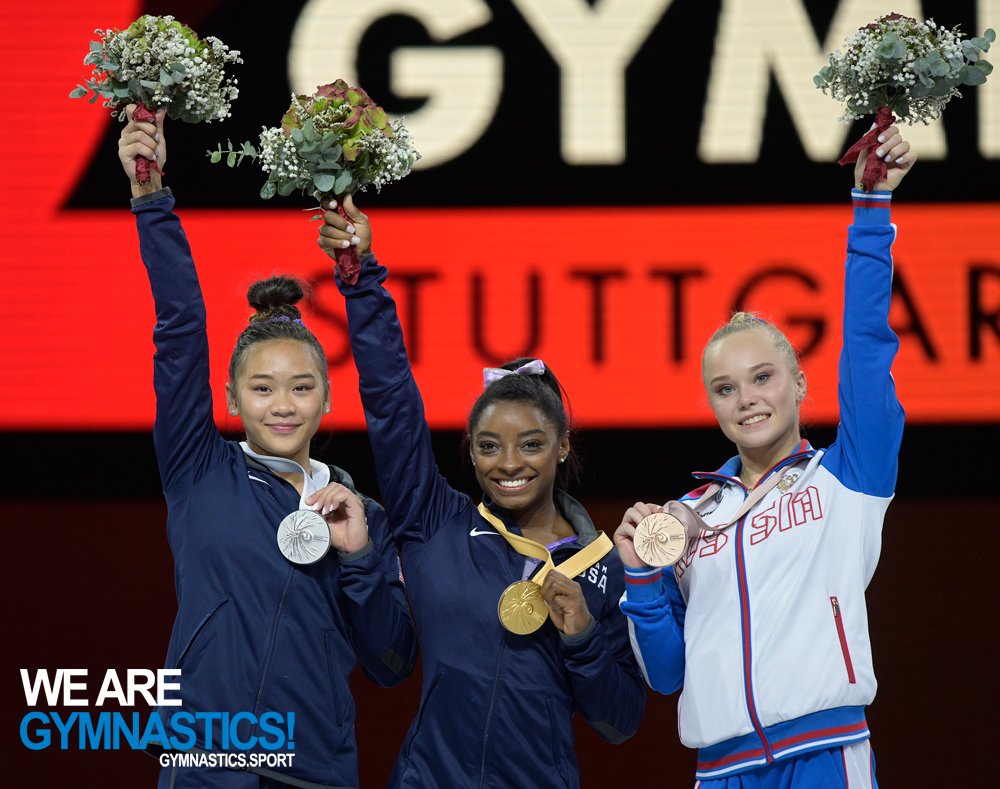 There is surely nothing left that could be surprising about US gymnast Simone Biles.

She has dominates the world of women’s artistic gymnastics; is an open book when she has something to say, and she collects medals like many others her age collect shoes.

The one thing that Biles doesn’t do, however, is count her medals – it appears that everyone does that for her.

Winning her 24th and 25th world championship medals in beam and floor in Stuttgart put the United States gymnast top of the all-time medal charts for the championships.

Biles won five gold medals at these World Championships. If she can repeat that at the Tokyo 2020 Olympics it would be a feat no female gymnast has managed at a single Games. But for Biles, it’s not about the statistics.

“I’m not a number person,” she said. “[But] I can’t be more thrilled with the performance that I put out at this world championships.”

At the age of 22, Biles is a hero to younger gymnasts who grew up watching her routines.

“I’m second in the world after Simone Biles, and she’s obviously so amazing. And to be second is super crazy,” the 16-year-old US gymnast Sunisa Lee said after taking silver behind Biles in the floor exercise. “I don’t know how she’s been doing this for so long.”

Biles’s 24th medal came on the beam, breaking a tie for 23 with Belarusian gymnast Vitaly Scherbo.

Biles scored 15.066 after a near-flawless routine, opting for a simpler dismount than the double-double she performed earlier in the championships.

When her score was announced, guaranteeing the medal record, Biles punched the air.

China took silver and bronze with Liu Tingting on 14.433 and Li Shijia on 14.3, respectively.

Biles won the floor exercise by a full point, scoring 15.133 despite a step out of bounds on one pass, and blew kisses to the audience after finishing her routine. Her US teammate Lee won silver, her third medal of the championships, while Angelina Melnikova took bronze for Russia.

Biles’s winning routine came after a long wait when Brazilian gymnast Flavia Saraiva requested an inquiry into her score, during which time Biles sat on the edge of the floor.

Her earlier gold medals came in the team event, the individual all-around and the vault.

A fifth place on uneven bars ended Biles’s chances of winning a medal in all six events, which she did in 2018 in her comeback world championships after a sabbatical in 2017.

The uneven bars are historically Biles’s weakest event, though she still won a world silver in 2018, and two-time world champion Nina Derwael of Belgium is the strongest contender to stop a gold-medal sweep by Biles and the US women’s team at the Olympics.

Biles hasn’t confirmed whether she’ll continue to compete after the Tokyo Olympics, so this may have been her last at the world championships. Blowing kisses to the crowd wasn’t meant as a goodbye to the competition, she said.

“It’s just a good floor routine, farewell to just the end of this world championship chapter here in Stuttgart,” she said.

Earlier, Russia’s Nikita Nagornyy won the men’s vault for his third gold medal of the championships. He’s the first European man to win the vault since 2010.

Nagornyy scored an average 14.966 from his two vaults, beating his friend and Russian teammate Artur Dalaloyan into second place. The bronze went to Ukraine’s Igor Radivilov.

Arthur Mariano won gold for Brazil on the high bar, scoring 14.9 ahead of Tin Srbic for Croatia. Dalaloyan took the bronze to end the championships with four medals.

Buenos Aires 2018: ‘My dream is not a dream any more,’ says Diogo Soares