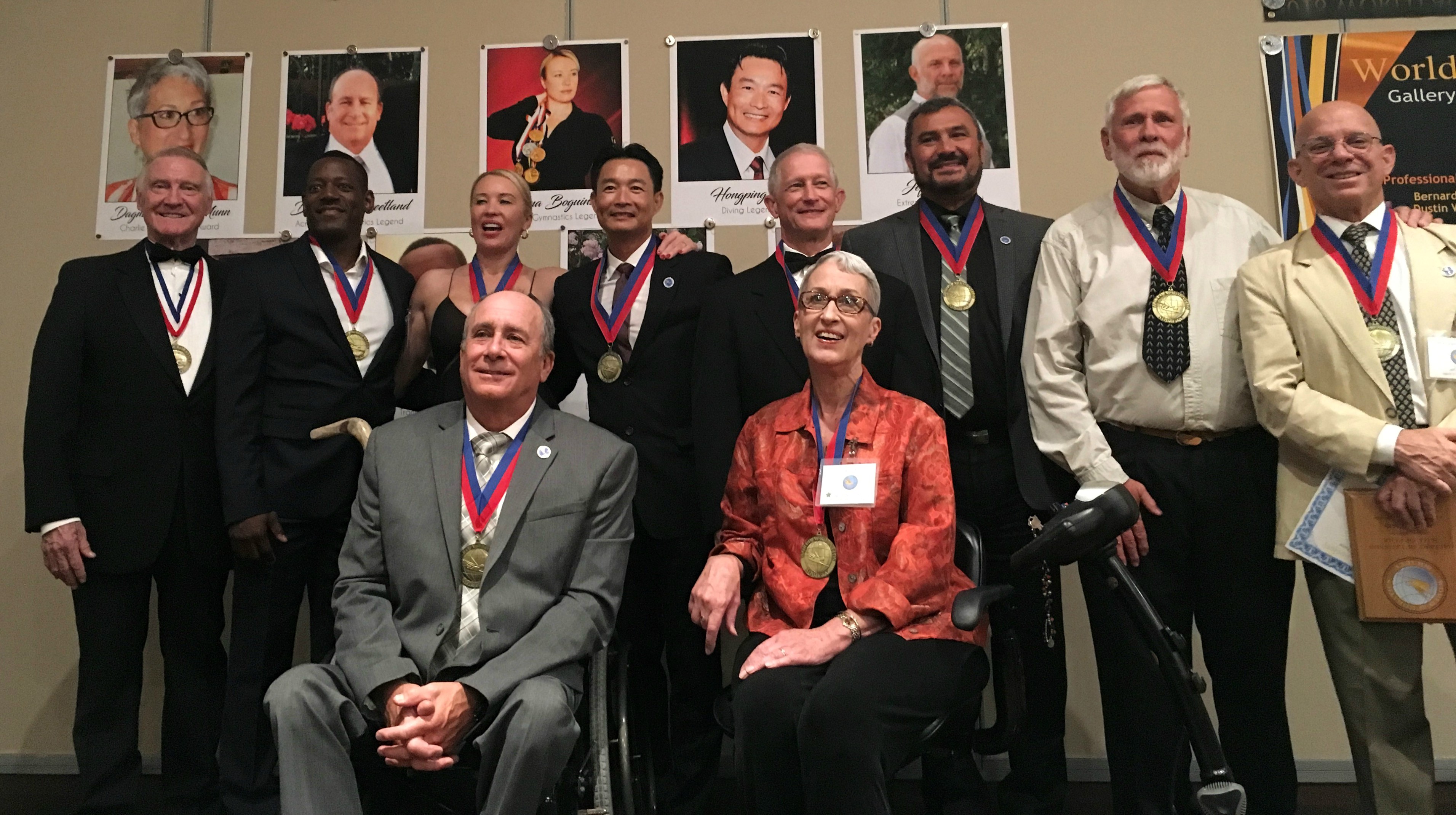 The World Acrobatics Society held its 19th annual “Gallery of Legends – Hall of Fame” banquet on September 7, at the Tuscany Casino & Suites in Las Vegas. An audience of approximately 125 people honored the nine Class of 2019 inductees. They were selected for their high level of accomplishment and contributions to the acrobatic community.

The John Sweetland-Bob Monahan acrobatic duo performed together for nearly 15 years and helped lay the foundation for acrobatics becoming a competitive sport. They were National Champions in the Men’s Pair Balance Exercise division in 1976, 1977 and 1978.

Hongping Li was among the first Chinese divers to participate in competition outside China. Representing China, he received gold medals for his platform diving at the 1981 FINA World Cup and at the 1981 World University Games and he finished fourth on the 3-meter springboard at the 1984 Olympics. He is now the Head Diving Coach at the University of Southern California.

World Cup Aerial Champion (1978-79), Jeff Chumas went on to become Freestyle Program Director for the US Ski Team (1985-1995. He was Manager of Slalom, Moguls and Aerials Sport for the 2002 Winter Olympics (1998-2002), in addition to co-producing more than 20 World Cup Freestyle Competitions. Jeff now excels in all aspects of stunt work for motion picture and televised productions; spanning the roles of stuntman, stunt rigger, stunt coordinator and as performer

Daniel COLA was a member of the French Trampoline National Team from 1978 to 1982, when they won the team title at the World Championships in 1982. In 1993, COLA joined the cast of Cirque du Soliel, performing in a trampoline act for the show Mystère, in Las Vegas. Following a tour of Asia and Europe with the show Alegria, COLA returned to Montreal in 1998; creating the first “Trampowall” act for the Cirque du Soleil show La Nouba. He served as acrobatic coordinator for: The Beatles LOVE, Wintuk and VIVA ELVIS shows (2005–2012). Leaving Cirque du Soleil in 2012 to pursue his passion for set design and stage direction Daniel continues to contribute to the circus arts as a consultant for human performance and acrobatic design. 2

Roger represented the USA in Platform Tumbling at the World Friendship Cup in Portugal in 1989. From 1988 to 1997 he earned numerous other national and world titles in tumbling. He was a member of the Men’s Senior Elite Tumbling Team that took gold in 1996 at the World Championships and he won a silver medal at the Canada Cup in 1997. Roger was twice selected as the National Age Group “Coach the Year” for Tumbling and is opening his new T&T Ninja Warrior facility this fall.

Dave Thor was the Big 10 all-around champion, 1966 – 68; third in all-around at the NCAA Championships in 1966, 1968; and received the Nissen Award in 1968. He represented the USA at the 1967 Pan American Games; winning four medals; a team gold and three individual bronze medals in all-around, pommel horse, and floor exercise. He was an alternate at the 1967 World University Games and was the top US Olympic All-Around Gymnast in 1968 and All-Around Champion (gold medal). He won gold medals on pommel horse, floor exercise and parallel bars as a member of the US Team at the 1969 Cup of the Americas, Mexico City. Dave went on to become Head Gymnastics Coach for Temple University (1973-76). Settling down in Utah, Dave taught at Kennedy Junior High School for 24 years.

Dr. Jay Whelan was an outstanding national and international gymnast who is a lipid biochemist studying the role of dietary bioactive compounds as they relate to the biomolecular mechanisms in the treatment of cancer, vascular diseases and diabetes. During his gymnastics career, Jay was first in the all-around, floor exercise, parallel bars and high bar at the NCAA Championships; a member of the USA team for the World Gymnastics Championships; received the Nissen Award in 1975 and was team captain of the first USA team to the People’s Republic of China in 1976. He was the Assistant Gymnastics Coach at the United Stated Naval Academy (1976-1979); Head Men’s Gymnastics Coach at North Carolina State University (1979–1980). Jay earned a PhD in Nutritional Sciences from Penn State University (1988). Currently, he is a Full Professor and Head of the Department of Nutrition as well as the Interim Head of the Department of Public Health at the University of Tennessee

Dagmar Nissen Munn “grew up bouncing on trampolines” and competing in gymnastics. She is the daughter of George Nissen (2001 WAS Legend, inventor of the modern trampoline) and is married to Ron Munn (2001 WAS Legend). With a Master’s degree in Dance from Mills College and a strong will to make everything better, Dagmar has been an invaluable volunteer within the World Acrobatics Society for many years.

Including these nine honorees, the WAS Gallery of Legends – Hall of Fame has inducted 297 individuals from around the world.

The World Acrobatics Society (WAS) is an exciting, growing world-wide not for profit 501(c)3 organization whose members share a love of acrobatics. The mission is to advance the education, communication and cooperation among all individuals and organizations interested in fostering the growth, development and safety of the various acrobatic disciplines along with preserving their histories.

For full bios or to learn more about the World Acrobatics Society, visit: worldacro.com

To see full videos of inductees, visit:  WAS Inductee Videos