Skip to content
You are here
Home > News > Minsk 2019 European Games: Belarus at the double as Hancharou bounces back 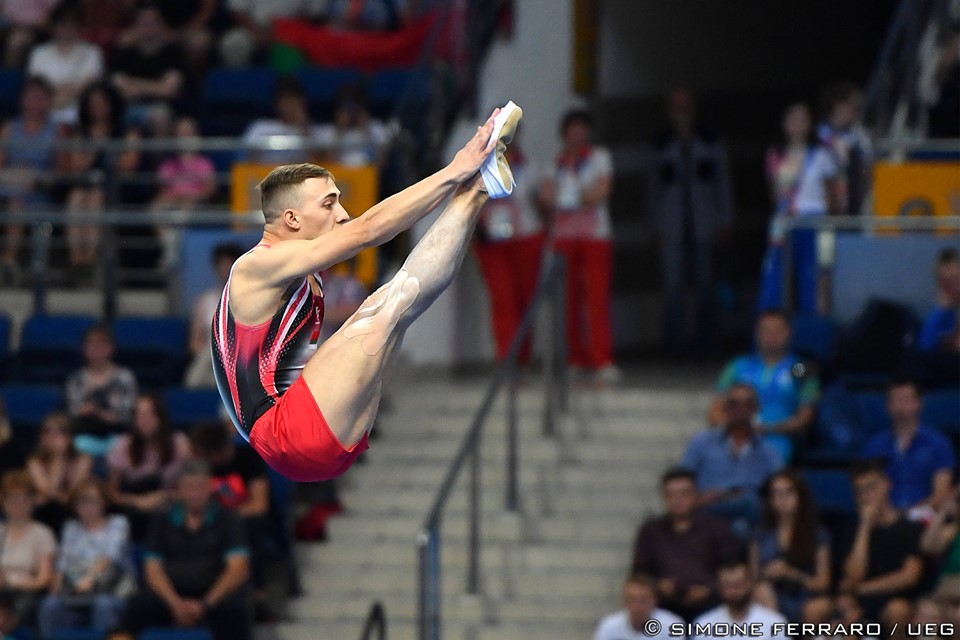 Belarus had plenty to cheer about as their trampoline gymnasts claimed both the individual men and women’s synchro gold medals at the Minsk Arena in Belarus.

Uladzislau Hancharou showed exactly why he’s Olympic champion with a dominant display in the men’s event.

The Belarusian, who was leading following the qualification round, gave the home crowd a masterclass display to score 60.045 pts. That routine saw Hancharou finish 0.6 pts ahead of the second-placed gymnast.

This may have been due to the inspiration he drew from the spectators.

“When you are going to do your routine you don’t really pay attention to it, you forget that there are spectators, that somebody is supporting you, whether you are performing in Belarus or abroad,” Hancharou explained.

“But when the combination ends you hear the support, noise [and when] somebody is screaming ‘Belarus’, it inspires.”

“During the preliminaries it was very noticeable. Then they asked spectators to be more modest. Sometimes you may pay attention to a yell and will lose concentration during jumping.”

The silver medal went to Russia’s Mikhail Melnik, who was in third place at the end of the preliminaries, with 110.635 pts.

In the final, Melnik delivered a fine routine (which had the best time of flight and horizontal displacement scores of the round), but they were not enough for him to overcome Hancharou and saw the Russian take the silver medal.

Reigning European Champion Diogo Ganchinho of Portugal fell one place to third with a score of 58.660 pts.

On winning bronze, Ganchinho said: “It’s very special. I participated in the first European Games in Baku. I made the final but then I was not able to finish my exercise, so it feels really special to come here four years later and get a medal for my country. It’s the best honour you can do for your country.

“I’m really, really happy. I was always really close to making great results and I was always missing by, not by far, but just a little bit, and now everything is coming together.”

The Ukraine’s Mykola Prostorov claimed the 4th spot with a score of 58.400 pts. A mere 0.01 behind in 5th place was Allan Morante of France Benjamin Kjaer of Denmark completed the line-up for the final, finishing 6th with a score of 56.250 pts.

At 18, Great Britain’s Corey Walkes was the youngest competitor in the men’s event.

Speaking after becoming first reserve for the final, he said: “It’s a stepping stone. I’m looking forward to the future. It’s good being in the same environment with old, experienced people.”

Competing second, the Belarusians put on an outstanding display which left Hancharova was beaming from ear to ear as they finished.

The result made sure that the home crowd had something to cheer about as they cruised to victory with a score of 50.230 pts.

Their performance was so commanding that the reigning European Champions finished almost two points ahead of the second-placed pair, Svitlana Malkova and Maryna Kyiko of Ukraine (score 48.240 pts).

Hancharova said: “Synchronised is probably a bit harder because you are not alone. You have a responsibility because you do the job together. You are not just responsible for yourself. That’s why it’s so important to communicate.”

Defending champion Yana Pavlova of Russia, who was partnered with Irina Kundius this time around, took the bronze (48.140 pts).

Pavlova said she was satisfied with the result following her sixth place in the women’s individual final.

“We felt more aggressive because of [the individual women’s] failure, therefore we managed to achieve this result,” she said.

In 4th place were Lea Labrousse and Marine Herbert of France (47.550 pts), followed by Netherland’s Niamh Slattery and Romee Pol in 5th (47.200pts). Portugal’s Saiote Silvia and Martins Beatriz finished 6th with 46.380 pts, ahead of Mariela Peneva and Hristina Peneva of Bulgaria, who scored 43.880 pts to finish 7th. Luba Golovina and Teona Janjgava of Georgia were eighth, with 37.040 pts.