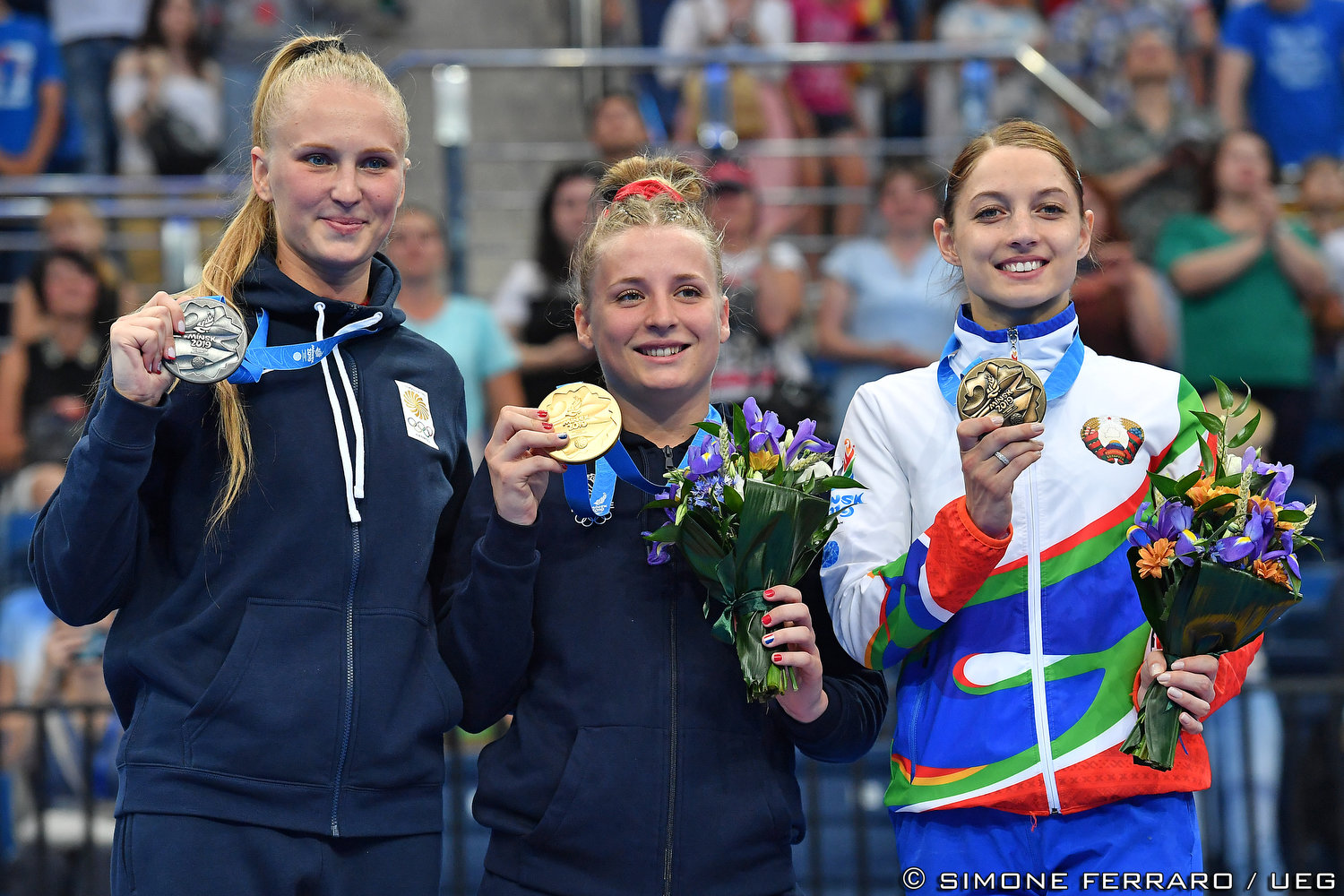 The first trampoline events of Minsk 2019, the second edition of the European Games, were contested at the Minsk Arena in Minsk, Belarus.

These were individual women’s and synchronised men’s events.

In the women’s individual event, Lea Labrousse of France, who was in third place after the preliminary round, improved on her previous score (54.460pts) to claim the gold medal with a score of 54.800 pts.

Georgia’s Luba Golovina, who was in 6th place after the preliminaries, rose to the challenge in the group to win the silver medal, almost 1.0 pts behind Labrousse. Labrousse’s routine was slightly less difficult (14.00 pt tariff), but had better execution and time of flight (16.3 pt/15.500 compared to Golovina’s 15.2 pt/15.090).

Labrousse and Golovina were joined on the podium by Hanna Hancharova of Belarus, who scored 53.970 pts to finish in the same position as four years ago.

Yana Pavlova of Russia, who was the favourite to retain the title she won in Baku in 2015, had an uncharacteristic error and was unable to complete her routine in the final, and finished in 6th place.

On the key to winning the event, Jaworski said: “There are two people jumping in this event, one can fall. It’s a normal phenomenon that athletes slip during training and competition. We just keep positive under these circumstances and try our best.”

Zakrzewski added: “We are happy about [winning]. We feel different. The result surprised us. We prepared the routine for this competition for two months.

“This is a really good record. This is our work. This is also what we should do.”

Davydenko and Prostorov’s score of 51.350 kept them ahead of Allan Morante and Sebastien Martiny (FRA), who finished the event with a score of 50.790pts and the bronze medal.

Another narrow margin, 0.07pts, was the difference a medal and 4th. On this occasion it was the Portuguese pair of Diogo Abreu and Diogo Ganchinho who missed out, with a score of 50.720pts.

Ruslan Aghamirov and Ilya Grishunin (AZE) claimed the 5th spot with a score of 47.900pts, followed in 6th place by Maans Aaberg and Jonas Nordfors of Sweden. Aaberg and Nordfors scored 43.000pts.

In unexpected turns of events, Andrey Yudin and Mikhail Melnik of Russia were unable to finish their routine. The local favourites suffered a similar fate: Aleh Rabtsau and Uladzislau Hancharou were unable to add the European Games crown to their world championships synchronised title because their routine was marked out of one element.