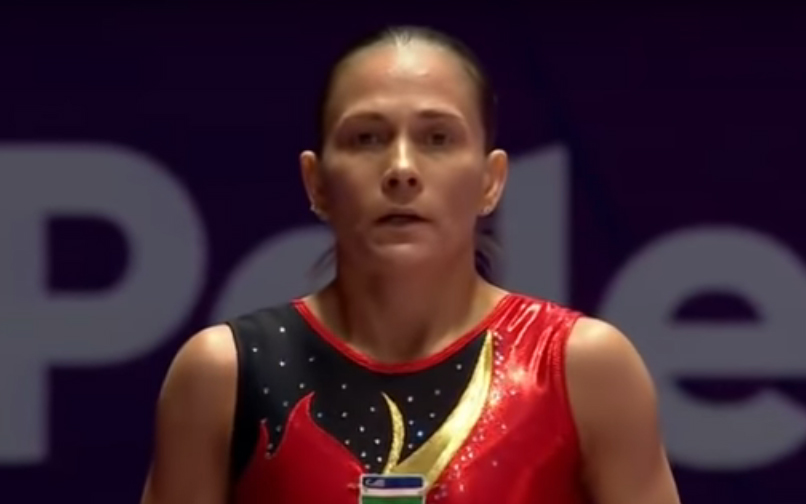 Oksana Chusovitina is not sure how many gymnastics world championships she’s competed in.

When you talk to her, this comes as no surprise. The 43-year-old from Uzbekistan isn’t into numbers, particularly the one that defines her age. She understands her longevity and her success – a gold and silver medal from seven trips to the Olympics as well as seven more medals in 15 world championship appearances – makes her an inspiration of sorts.

All she knows is the drive to get up in the morning and go through a 2½ hour workout six days a week is still there.

“I love gymnastics so much and that’s why I continue doing it,” Chusovitina said through a Russian translator.

Then, as is for emphasis, Chusovitina added in English: “I have fun.”

It certainly looked like it during her brief cameo at the Aspire Academy Dome. Chusovitina put herself in position to make an appearance in the event finals after averaging 14.2 on vault, her signature event.

Though she lacks the explosiveness of some of her competitors – almost all of whom weren’t born when Chusovitina made her Olympic debut in 1992 while competing for the Russian unified team – Chusovitina tries to make up for it with her execution. Her combined e-score of 17.9 was high up among early qualifiers.

Yet her scores are almost immaterial at this point. The woman who has talked about retirement for more than a decade simply keeps on going. Her son Alisher turns 19 next month but knows better than to ask her when to she’s going to retire.

“He is always worried about me but he knows how much I love it so he would never say ‘Mom, stay home,’” Chusovitina said. “He’s just supporting me.”

And Chusovitina is still supporting the sport. How else to explain why she volunteered to spray the uneven bars – an event she didn’t compete on – to get them ready for 16-year-old team-mate Sabina Turobova and 23-year-old Marina Nekrasova of Azerbaijan. It’s the equivalent of Tiger Woods playing caddy for a random PGA Tour player.

“When we compete we all are equal on stage,” Chusovitina said. “Even though we have different age we have to perform in the same way.”

Well, not quite. Chusovitina understands a quarter century into her remarkable career she’s nowhere near the level of reigning Olympic champion Simone Biles, a heavy favourite to win the all-around and vault titles.

When asked if she’s a phenomenon in her own right, Chusovitina shrugged.

“It’s different because I take it with my age and she takes it with her mastery and skills,” Chusovitina said. “So it’s often that I watch the videos and learn from her as well.”

It’s a process that has no end in sight. Chusovitina is hoping to qualify for the 2020 Tokyo Olympics, which will take place a month after her 45th birthday. Her presence helps bring attention – and money – to Uzbekistan’s sports programs. Yet she’s not doing this to help keep interest going in her home country. It’s much more basic than that.