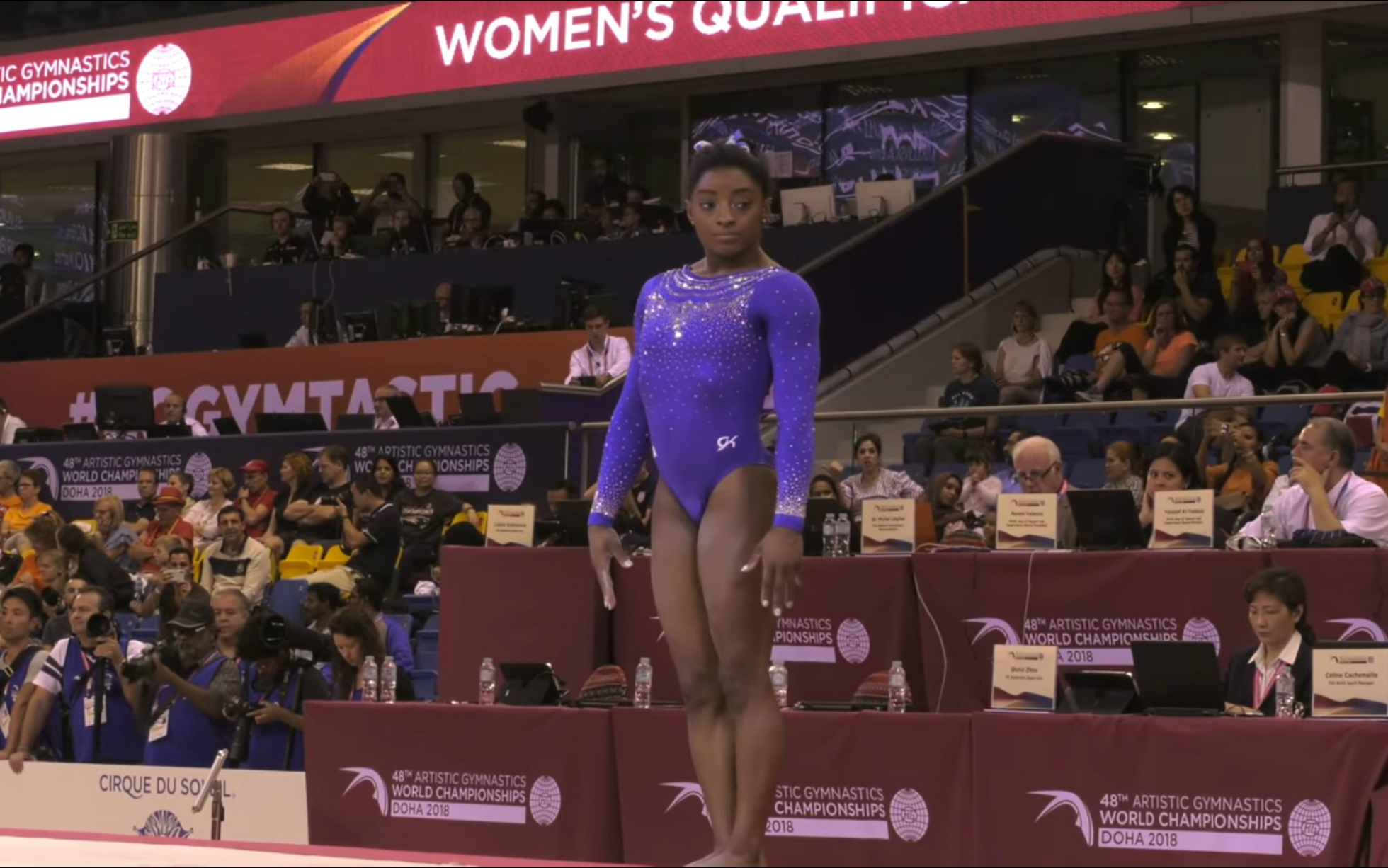 Simone Biles spent a portion of the night before her return to world championships in the hospital. The sensation she chalked up to the usual pre-meet stress evolved into searing agony that at times left her crawling on the floor.

When a CT scan revealed a kidney stone — one she nicknamed “the Doha Pearl” — the reigning Olympic gymnastics champion grabbed her stuff and discharged herself from the hospital, telling the staff she’ll deal with the pain later.

One that turns each performance into a thrill ride of its own. Smiling through each twist, flip and turn, the 21-year-old Biles was nearly flawless during qualifying, posting the highest scores on balance beam, floor exercise and vault on her way to a total of 60.965 on a day when the Americans put up a team score of 174.429, a staggering 12 points clear of second-place Japan through six of 11 qualifying groups.

“She’s Simone,” US high performance coordinator Tom Forster said. “You’d expect the same out of a Michael Jordan or a Tiger Woods and that’s who she is in our sport. And she showed it.”

Even though she didn’t get back to the hotel room she shares with team-mate Riley McCusker until after 1 am. Even after skipping the early workout as a precaution. Even though she couldn’t be treated with the same pain medication typically given those dealing with kidney stones because doing so would put her in jeopardy of failing a drug test – it didn’t matter. Biles did what she always seems to do when the rest of her sport is watching: She dominated.

Her all-around total marked the highest in the world since her gold medal-winning total at the 2016 Summer Olympics. And still she sees room for improvement.

Asked what she’d give herself on a day she completed a vault in competition that will end up bearing her name the next time the code of points is updated, Biles shrugged and said “6 or 7.”

Not bad considering Biles was initially concerned she had appendicitis, which would have forced her to sit out the competition entirely. Instead it’s “just” a kidney stone, albeit one Biles believes she won’t be able to pass, meaning she’s going to have to deal with it throughout a very busy week that will include team finals, the all-around final and all four event finals.

Biles believes she’ll be fine. Even if she’s not quite 100 percent, the gap between herself and the rest of the world is so sizable it might not matter. She finished more than four points ahead of teammate and 2017 world champion Morgan Hurd, whose score of 56.465 edged Japan’s Mai Murakami for second halfway through qualifying and assured Hurd of a spot in the finals.

The public address system played a bell akin to the start of a boxing match when the US headed to uneven bars. What happened over the next 90 minutes was the gymnastics version of a technical knockout. Hurd led off with a 14.466 that seemed to send a message that while the faces with the stars-and-stripes leotards change, the expectations and results do not.

“There’s clearly a lot of pressure there,” Hurd said. “How many world championships has the U.S. won? We have to keep the pedestal.”

Looking for a way to give McCusker, Grace McCallum and Kara Eaker — each of whom is making their world championship debut — a breather before stepping onto the podium, Forster opted to have Hurd lead off in three of the four events. Forster called the move a “gut feeling,” one Hurd eagerly accepted.

“It honestly makes me a little less nervous because I have less time to get even more anxious,” said Hurd, who hardly looked nervous while qualifying for event finals on floor exercise and uneven bars.

McCallum competed in three of four events, and her 14.6 on vault probably earned her a berth in the event finals. Kara Eaker, who turns 16 next month, drilled a 14.466 on balance beam and McCusker overcame a stumble on beam that she admitted left her “frazzled” to finish fifth in the all-around.

McCusker, however, won’t qualify for the all-around finals thanks to the rules that limit countries to two athletes per event in the individual competition. Still, she’ll be part of the team final, and extending the U.S. win streak — the Americans have won every major international competition since the 2011 world championships — has always been the focal point.

“We all have different qualities that we can bring to the team,” McCusker said. “We can all shine in different places.”

Or, in the case of Biles, every place.

She’s intent on pushing the sport forward, and her astounding opening vault — a roundoff, half-twist onto the table, front double full off that has only previously been done in competition by men — sent a jolt through the crowd. More importantly to Biles, the vault will carry her name when it’s added to the code next month.

Another remarkable step in a remarkable career that keeps rolling no matter what her body throws at her.

Minsk 2019 European Games: Belarus at the double as Hancharou bounces back