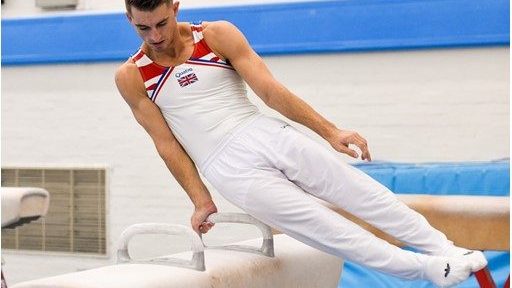 When Great Britain’s male gymnasts start their qualification competition, their star turn Max WHITLOCK will already know how his closest rival on pommel horse fared earlier in the day.

Rhys McCLENAGHAN of Ireland, who won gold in this event at the Commonwealth Games in April ahead of WHITLOCK, competes in an earlier subdivision, starting at 14.00.

The defeat of the Olympic and world champion in Australia took many by surprise, although to be fair, both gymnasts earned the same score. McCLENAGHAN won the gold on a technicality – his execution score was higher than WHITLOCK’s, and was used to break the tie.

“Gymnastics is so unpredictable,” said WHITLOCK, who also stumbled in his other speciality event, floor, at the Commonwealth Games and finished without a medal. “But I can take a lot of positives out of Australia. It taught me a lot of lessons. Whatever happens on the day, happens.”

In a sport where precision is everything, pommel horse is one of the most challenging events. One hand placement slightly out of kilter can upset the whole rhythm of the routine, and once the rhythm is lost, a falter can lead to a fall.

“You never know in sport. I never expect anything,” WHITLOCK said. “Qualification is obviously the priority at the moment. I’ve just got to do my job, stick to my plan, try not to worry about what anyone else is doing. Then hopefully it will work out.”

WHITLOCK’s qualifying competition will be finished in just over half an hour on Thursday evening. He is competing only two routines, floor exercise and pommel horse, and they are the British team’s first two events.

As well as his personal goals to reach both floor and pommel horse finals, WHITLOCK’s scores will also contirbute to the team effort. Barring any major calamity, a top eight finish, and qualification to the team final, is well within the team’s capability.

Russia beat them into second place in the last two European team finals (in 2014 and 2016), so they are clearly the team to beat.

“Russia are a brilliant team. They’re looking really good,” says WHITLOCK. “I’m sure they’ll be ready for their competition both in qualifying and the team final.”

WHITLOCK is also aware that the home advantage, in a venue where he has seen previous success (three gold, a silver and a bronze medal at the Commonwealth Games in 2014; gold and two silver medals at the world championships in 2015) could give the British team the edge.

“I’ve got amazing memories of this venue,” he said. “Obviously 2014 Commonwealth Games and 2015 world championships, both of those were just unbelievable competitions – the support, the atmosphere and the results were really good. It doesn’t matter who we’re against, our team’s got to have the same mindset. Our job is to believe we can do it.”

Although he sees these European championships as a significant event in their own right – particularly as they are part of the first multi-sport event of its kind – WHITLOCK has a long term strategy far beyond these championships.

“Every competition is a stepping stone for the next one that’s coming up. That’s the way I look at it,” he said. He is not just talking about the upcoming world championships in October, the first qualifying step on the route to the 2020 Olympic Games in Tokyo.

“I’m hoping to carry on for another six years,” the 25-year-old said. That would take him to the 2024 Olympics in Paris, which would be his fourth Olympic Games. His Olympic career began when he was just 19 in London 2012, where he won two bronze medals – team and pommel horse. His big triumph came four years later in Rio, with gold medals for floor exercise and pommel horse and a somewhat overlooked, but mightily impressive, bronze all-around.

If WHITLOCK can make it to a further two Olympics, he would be 31 years old when he finally hangs up the chalk bag. “It does get harder as you get older but hopefully I can keep going for as long as I can.”

Men’s qualifications start at 10.00 with subdivision one, followed by subdivision two at 14.00 and subdivision three at 18.30 at The SSE Hydro on Thursday. The team final is on Saturday and apparatus finals are on Sunday.